many teenagers will think that being made to read Dickens aged 16 is just tedious...

I felt incredibly deflated by the thought that we've created a world where people will miss out on the colour, characters, truths and entertainment of reading Dickens. John Walker writes more about the whys of the matter on his blog and comments:

Too often the velleities of secondary school expectation are to blame.

After looking up "valleity" (a wish or inclination not strong enough to lead to action), I agreed with him.

I know I can't change everything, but the one thing I can do is raise the expectations of the young people who come into contact with That Reading Thing. While applying The Deal (you never have to know anything we haven't learned together), we also apply the flipside of The Deal (you DO have to know what we have learned together). Part of that expectation, even taking into cons 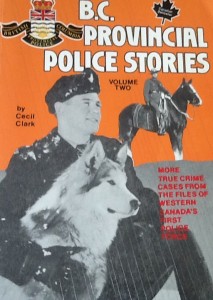 ideration age and level reached, is that they be reading "real text" from real books, papers and magazines.

So here's the first in a series of posts about a few books I've loved working with over the years - starting at the highest ability and working down. Keep in mind that every single one of these books has been read by young people who come to TRT because of their literacy issues.

I read this first with a young man who was well out of the education system and considered himself to be a non-reader. He wasn't, of course, or I wouldn't have started here. I've since read this with others though I have sometimes retyped the stories for print size and to remove a few racial terms that I would consider to be totally unacceptable today - though the elderly author was simply using the language of his time.

I love reading the "Footprints to the Gallows" story because two words (Scheidam and Eocene) come up in the first paragraph and they're words that I simply don't know. I've never heard them and I've never said them - so right from the start we get to apply TRT principles together, demonstrating that this isn't something that was thought up for people who can't read. The words are decodable but we still have to find meaning for them so talk a lot about what's going 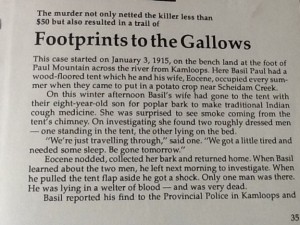 on in this story. The ability of the trackers to recreate a crime scene from a few footprints is amazing. And there's always that capital punishment debate to be had. (I also have the privilege of having known the author who was at the last public hanging in British Columbia, had old coroner files in his spare bedroom and many many tales to tell.)

This story, "Shackled, Starved and Chained" has been a treat to read with young offenders. They can relate to the restrictions of imprisonment and have very clear opinions about things like shackles, rock breaking and 12 year olds incarcerated with adults. The story itself isn't just a litany of facts but the account of a heroic prisoner who exposes a crooked governor at great risk to himself and his liberty. I've had some superb conversations about the purpose of a criminal justice system with boys who have been written off by the education system.

The wonder of one-to-one is the chance to attack challenging texts like this, but that's not an excuse not to challenge more able students with complex texts. It's time to get our high school students reading beyond their current levels, somehow, some way.