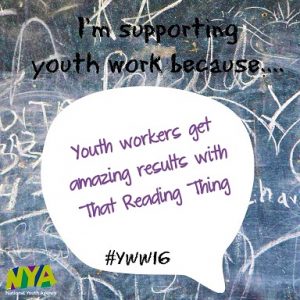 That Reading Thing came into being because of young people I met through youth work. It was originally a youth work tool and used mostly by youth workers and volunteers trained to work in youth projects. They did such a spectacular job that schools took notice because their furthest out students were beginning to come to class on time, in uniform and able to engage. Why? Because youth workers had helped them, for the first time, discover how the English language works for reading and spelling. They no longer had to guess or skip the long words in text. They could hear the language they were reading for the first time. Over the years, That Reading Thing has become a tool used by schools as much as by youth workers. In fact, on hearing one of the TRT projects was closing, the youth worker was hired by a local school to deliver That Reading Thing 20 hours a week.

So schools and That Reading Thing have a great relationship, but – seeing as it’s Youth Work Week – it’s worth talking about the added value of having youth workers deliver education to those teens and young adults who are most at risk of struggling in life.

Here are just a few examples:

⇒A youth worker (who’s TRT trained) is asked by the school to work in a mentoring capacity with a young woman who is self harming. It turns out she’s self harming because she struggles to read and is being bullied for it.

⇒A young man is trained to be a TRT tutor to year 7s in his school. When the youth worker goes to find out how his tutoring is going it turns out he really needs to talk about a crisis with his parents because he’s told them he’s gay. (TRT can wait.)

⇒A youth worker, Sarah, is walking a teenager out of the building after his TRT session. He also happens to be a gang member. Coming the other way is another gang member she worked with the year before. She wonders if they’ll even acknowledge each other.

It may not sound like much but they were two young men who wouldn’t normally admit to being involved in education. Hearing that story convinced me we were onto something more than just another reading programme.

⇒Finally – a story that just came to me from a youth worker in Cheshire. In her end of funding report she shares all sorts of successes with That Reading Thing, but she also talks about a young man for whom TRT just didn’t work because of serious speech and language difficulties. You’d think that would be the last thing I’d want to write about here but I can’t resist celebrating this young man’s other achievements – all because of his involvement with a youth worker.

Thomas was referred to us by a voluntary organisation when he applied for volunteer work but couldn’t fill in any of the forms. He had been to a non-mainstream school and had a history of aggressive and violent behaviour. However, when meeting me, none of that was evident and he did not miss an appointment even though he struggled with TRT each session.

After 3 months of trying really hard, it was apparent that Thomas’s speech impediment and possible learning difficulties were a huge barrier, and trying to read and continually failing was bringing him down and making him feel bad. So we decided to continue meeting but just for a cup of coffee while he worked through what other barriers there were to him getting a job.

We have worked together for the whole of the 18 months …and, although Thomas cannot read, we have made some significant progress in other areas of his life.

I hope that we can continue working with Thomas until he is settled in employment and that we can re-start TRT once his speech therapy has finished.

Schools get marvellous results with That Reading Thing – but throw in a youth worker and the added value can rise considerably, especially for the most vulnerable young people.

Send me a message so we can talk more about youth work and relational education.