Whenever I get talking to a teacher about spelling, I offer them my brilliant idea that every school should, in the first couple of weeks of the first term, have a "-tion Day" when each first year student and teacher will adopt a useful word ending in -tion. By the end of the day they will know what it means, how to say it naturally, say it for spelling, and, of course, spell it accurately.

I always end that conversation by saying something like, "I know there are other ways to spell the "shun" ending but -tion is by far the most common. I've been making that assertion based on experience rather than research so thought I'd dig a little deeper to back up my claims.

If you like words or at least like finding word patterns, then you probably know morewords.com. I usually get to it by searching for something like "words ending in" or "words with" and up it pops. This time it returned thousands of words ending -ion and arranged in order from most to least frequent. I scooped off the 720 most common, put them in alphabetical order and sorted them by <tion>, <sion>, <ssion>, <cion> and all the rest. 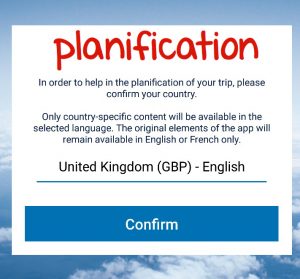 Without looking at the photo at the end of this post, what percentage of those 720 words do you think has the <tion> spelling? I was shocked, but it certainly backed up my gut feeling that, if every student coming into high school could spell -tion without thinking, then they would have mastered a whole lot of curriculum words without even trying. (They can also make up marvellous words like planification, as demonstrated by the instructions from my Air Transat app.)

Here's a selection from the S section. Note that the spellings of individual sounds are mostly those learned very early on in school. In most words, each sound has only one symbol to represent it except for <ph>, <ar>, <or> , <ci>, <er> and <pp>. There aren't even many unstressed vowels.

Here's the entire word list (it will open as a pdf): Spelling words with tion sion ssion

Go to That Spelling Thing for information on spelling training, posts and more.