I was speaking at a high school where I had one hour to train 30 staff members in spelling with the English code which meant no time for the usual asides, quips or soapbox moments. I found myself saying, “I love the idea of very high expectations, but…” and moving on before I could expound. I did get to share this slide, but, again, with no time to discuss the concept of every classroom being a “shame free learning space”. 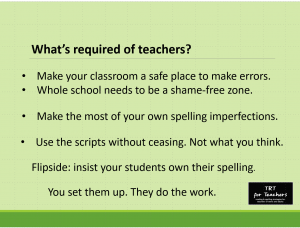 That lack of explanation bothers me because the essence of That Reading Thing is not just that it’s a sound method for teaching reading and spelling, but that it’s deliberately designed to work for the most vulnerable, disengaged, angry, (add your own adjective) learners.

The “but” of my first sentence is this: high expectations are marvellous as long as there is a safety net for those who have years of educational failure behind them.

If a 13/15/20 year old can’t read very well then they have already experienced enough shame. If they’re not already angry, they soon will be. These are the young people who show up to their first TRT session, saying, “I’ve been told I’m unteachable.”

If they don’t get angry, then they will attempt invisibility to avoid the humiliation that comes from not being able to do something that seems to come so easily to their peers. They’re the ones who come to their first TRT session saying, “I’ll never learn to read.”

When asked who told them that, they’ll say a teacher.

A teacher? I’m not sure that’s literally true. I hope no educator, even with a throw-away comment, told them they’d never learn to read. What I do think is that the everyday experience of shame has made them believe they’ll never be able to read.

So what makes That Reading Thing so different? Here’s what Professor Greg Brooks noted in his evaluation:

The key factors in TRT enabling many of these young people to make such good progress are (I surmise) the fact that all tuition is one-to-one and not like school, the use of an approach which makes immediate sense to the students and enables them to detect their own steps of progress, however small, and the programme’s distinctive feature dubbed ‘The Deal’.

To expand that a little – the features that set That Reading Thing apart are the deliberate antidotes to the shame that struggling older readers experience whenever they encounter the written word.

Over the next while I’m going to be knocking (virtually, mostly) on the doors of as many alternative education providers as I can to let them know that there’s a way to engage that one young person who is in danger of being labeled “unteachable”.