Alison Clarke of Spelfabet wrote this great post about vowels. If you read it, I don’t have to explain my 20 different vowels to you. They sound different from Alison’s but I have them – and so do you, give or take.

I wanted to give my own brief rationale for not using the terms “long” and “short” in the remedial setting of That Reading Thing.

You can get them to think about the differences between vowels and how that affects spelling patterns but without the jargon. After they’ve read and sorted all the ways to spell the “le” ending, we get out the Tweetle Beetles – read by me ridiculously fast, never the student unless they want to. Even the coolest of the cool will usually end up laughing. 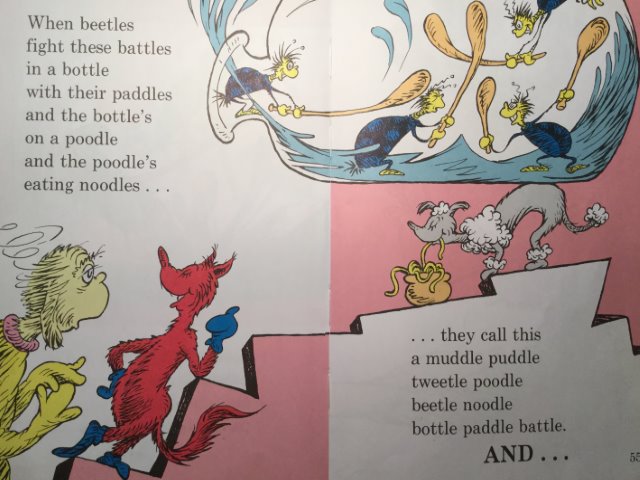 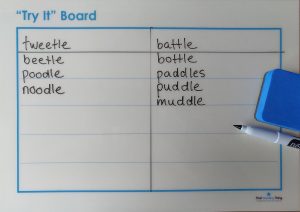 Then, on the TRT Try It board, I draw a line down the middle and we sort the words from the tongue twister with the book open.

We keep going with words that aren’t in the book and use sound only to decide on the spelling. You do need to point out that this isn’t a rule (double, treble etc) and that it only works with two syllable words (impossible, responsible etc). 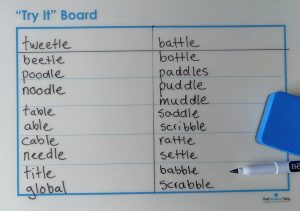 During this exercise, a student might naturally bring up long and short vowels and we’ll go with that as long as they’re consistently correct. If they don’t, I just keep getting them to say the sounds as they’re writing and the pattern becomes evident.

My experience is that struggling readers learn better by putting into practice than by listening to explanations. The more they physically and verbally manipulate the sounds and syllables without explanation, the better they remember.

All that said, teachers usually know what we mean by short and long vowels so it’s a quick way to refer to types of sounds. If you decide to use the terms with students, let them know they don’t have to think about the actual length of the sound or the spelling.