b and d Reversal

The tendency to reverse b and d is a huge embarrassment for older students who struggle to get the mirror image letters straight. On dyslexia discussion boards, the question keeps coming up, “How do we help our dyslexic students stop reversing b and d?”

Letter and number reversal is something that tripped me up for years – I have evidence still in a scrapbook which I started at the age of 6 or 7.

Click on the photo and check out the numbers. Warning: middle aged Canadians might swoon due to overwhelming nostalgia. 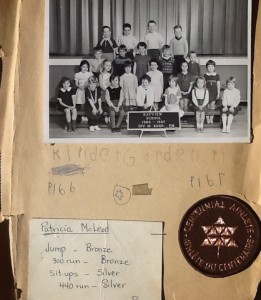 I know it’s related to difficulties with spatial awareness; even today, telling left from right and reading a conventional clock require my full concentration. I can also mirror write with little hesitation so making an L with thumb and forefinger do nothing to indicate which hand is which.

I’ve found ways of getting round my difficulties, but what do we do for for teens and adults who are still struggling with this b/d issue?

I’ve noticed over the years that fewer and fewer young people form letters and numbers in a traditional manner. Even well educated and literate teenagers write b and d almost like a 6 and a mirror image 6 – both of them written from the curl, around and up to the top of the line.

So what can be done?

Most importantly, DON’T suggest making a “bed” by curling your thumbs and forefingers into a b and a d and hope that this will solve everything.

This is by far the most popular suggestion I hear for fixing b and d reversal, but imagine seeing a 17 year old doing this while he’s trying to fill out a form. He’s an adult! And anyways – someone with a brain like mine will only panic at having to deal with two very similar shapes in the air.

DO make this about a combination of writing, seeing, saying and hearing – all at the same time. Associate writing the letter correctly with saying the sound clearly. Demonstrate the following for your student.

Using the x as a starting place, make a strong line down saying “b” (the sound, not the letter name) as you make the movement, then follow through with the “ball” part of the letter b.

Do that five times in a row then let your student have a go. Make sure they say “b” (the sound, NOT the letter name) every time they write the downward line.

Clean the board and draw 5 more x’s.

This time, using the x as a starting place, make the circle saying “d” (the sound, not the letter name) as you make the movement, then follow through with the up and down line of the d.

Do that five times in a row then let your student have a go. Make sure they say “d” (the sound, NOT the letter name) every time they write the circle. 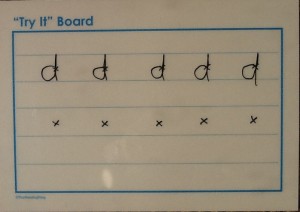 This is the best solution I’ve ever encountered and I’ve used it with success many times. You may have to do this exercise at every lesson for a while, but it eventually becomes automatic for both writing and reading. I think the “b” is the most memorable because of the strong sound and downstroke and the “d” is remembered by elimination.

It helps with reading as well as writing. I’ve seen a seriously struggling reader get to a word, quickly and surreptitiously move his forefinger and read the word fluently. More grown up and less “special needs” than giant quasi-sign language.